You are here: Home / love yourself / Willpower: What No-one Tells You 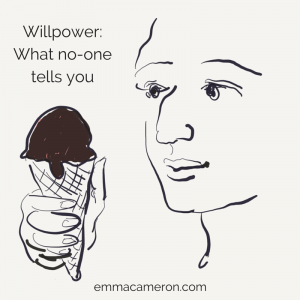 Willpower. You had it, for a while…

You were full of dreams of the new, improved you. It was you, only more organized/ healthy/ streamlined. But somehow, your reserves of willpower seem to have melted away like ice-cream on a hot day.

It was all going so well. You decided that this time, you’d really nail it. With this new diet/ meditation practice/ exercise routine/ online course/ productivity system, you would absolutely conquer those bad habits of yours, once and for all.

It worked wonderfully for a while. You told all your friends about this amazing new system that was transforming your life. You felt great. Like you could do anything. (Well, okay, you were hungry / tired / snappy with your loved ones… But you felt it was worth it, for the great results you were going to get.) 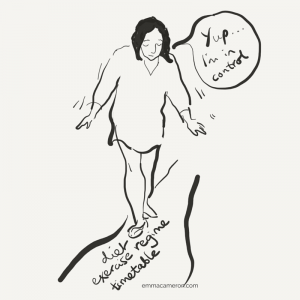 And then? Life happened.

Maybe you got sick. Or you went on a trip/ your relationship broke down/ your parent needed help/ your child got into difficulties/ your work schedule changed). And somehow, your glorious new habits, the life-saving diet/ exercise routine/ daily meditation/ productivity system – they all fell by the wayside.

And you cursed and sweated and dealt with all the demands of your daily life – and promised yourself that soon (January 1st/ once the school term started/ when life returned to normal) you would jump straight back on the wagon.

And so it went. Up and down. Round and round. The endless cycle of willpower ebbing and flowing.

Notice what’s happening. You now have a chance to step off the willpower cycle and on to a whole new level. This is your chance to do things differently. To get a new perspective, so you’re not stuck in that cycle.

Because what no-one tells you is this:

Willpower is not where it’s at. It can only take you so far.

The forces that are much stronger than willpower

Much, much stronger than willpower, there are three powerful forces whose influence that we tend to underestimate:

(Actually, there are more than three; we’re all deeply interconnected with others, and with powerful social and economic systems influencing us, e.g. capitalism, diet culture, racism, misogyny, homophobia, etc, and these all impact our ability to be active agents in our own life).

First, let’s acknowledge the power of the unconscious. What Freud maintained, back in the 1890’s, has since been backed by neuroscience, the scientific study of the brain and nervous system: most of what we say, feel and do is influenced by unconscious processes. (And this applies even when we are certain that it’s not happening!)

Secondly, our bodies have their own wisdom, their own agenda. The human body seeks homoeostasis, which means consistency across time and across circumstances. And one aspect of this is what’s known as ‘weight set-point theory’. (You can learn more about this here: https://seven-health.com/2018/03/114-set-point-theory/)

Third, we need to recognize that try as we might for it to be otherwise, most things are not actually within our control. People get sick, they die, accidents happen, and tragedies and disasters occur (both natural ones like earthquakes, and human ones like war, terrorism, and economic or political failures). And most of our self-improvement schemes are at root, designed as an attempt to make us feel safe. When the diet is going smoothly (or the exercise regime or the productivity routine), we can feel soothed and reassured that we are in control of life. It feels great, doesn’t it? Who wouldn’t want that? Well… Yes. But then sooner or later we bump (or crash) into that wall again. Because guess what – we aren’t really in control at all. Damn! (Oliver Burkeman’s new book, ‘4,000 Weeks’ explores this in more depth).

You can step blindly into repeating the same pattern – the cycle of the willpower-led self-improvement routine, followed inevitably by “failure” (often actually success, from a physiological point of view), and then after a suitable interval, continuing the cycle. In many cases, particularly where food restriction is concerned, this actually causes harm. Intentional weight loss (aka dieting) is not a neutral experience, both as far as your mind is concerned and also with regard to your body’s processes. There is a lot of evidence that food restriction causes long-term (as well as short-term) damage and negative changes, for example changes in where and how the body stores fat. (For more discussion and scientific evidence on this, you might like to read ‘Body Respect’ by Dr Lindo Bacon and Dr Lucy Aphramor.)

Or – you can look at what else is possible. What’s available when you look beyond sheer willpower, and try some other approaches. Because there’s lots you can do! And best of all, you can discover that the sense of security that you were seeking (through trying to control your eating/ exercising/ productivity scheduling) can be found through following a completely different path.

In another post, we’ll take a look at what you can actually do to turn things around. I’ll explain how you can move from your old willpower-based strategies (which, as you have found repeatedly, are likely to fail in the end) towards new approaches based on insight and developing new skills. New approaches that can give you new hope and much more happiness and peace of mind.