You are here: Home / therapy / Sandtray is a Way to Access Your Deep Knowing 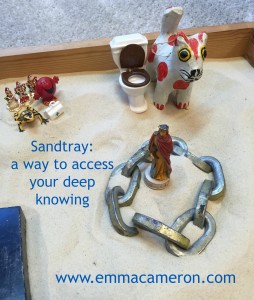 Sandtray in Therapy Helps You Access Your Deep Knowing

Have you ever had a chance to use a Sandtray in therapy? It’s an amazing resource.

What is a Sandtray?

A sandtray is typically a large wooden box with low sides. Some sandtrays have the inside base painted blue, covered over most of the time by an inch or two of fine, clean sand.

Lots of little objects stand on shelves (or are gathered in baskets) in the therapy room. These can include miniature figures, toys, stones, shells, ornaments, beads and other small items. There might also be a water spray bottle nearby, for wetting the sand so it can be moulded more easily.

(You can read about 14 ways that therapists can use stones in sessions, including sandtray, here.)

What Can Sandtray be Used for?

With the sandtray, and your therapist’s attentive support, you can explore ways to process:

Sandtray is amazing, because of what can come up, and how surprised we can be by that. And it can feel like such a relief to have ‘got it out there’ in a form that can be seen.

Sandtray Taps into a Different Part of Your Brain

Sandtray gets us to use the power of the right hemisphere of the brain. This is the side that sees and understands things as a whole, thinks laterally, and uses metaphor and imagery to connect ideas and concepts in fresh and meaningful ways.

Sandtray in a Therapy Session

Here’s an example of how Mila* used sandtray.

I invited Mila to depict her family. First, she decided she wanted to find something that could represent her Dad. Realising that I don’t have a little figure that looks like him, she quickly understood she was going to have to pick something else.

Mila scanned the collection, running her fingers over the dozens of different objects. She noticed that her hand kept being attracted to a feather.

This is silly, she thought. My Dad was a big, burly man: surely the lion or the bull would be more like him.

But somehow Mila felt like the feather kept ‘calling’ to be put in the sand tray. And sure enough, when she put the feather in, she felt a partial sense of satisfaction — it felt ‘right’, at least to some extent. Tuning in to her right-brain’s intuitive urgings, she soon decided that actually, a combination of the bull and the feather was needed.

Mila added a kitten wrapped in a piece of tangled string to be her mother, and two little stones to represent her brothers.

I asked Mila ‘where are you in this picture?’ She realised that she hadn’t found something to represent herself. In the end, she chose a seal.

Processing the Sandtray with the Therapist

Mila and I looked together at the sandtray she’d created. In the looking and the talking, we uncovered new insights about her family dynamics. These were things she’d never thought of before, which she said felt like they hadfloated up from a deep well of knowing inside her.

This wasn’t a dry, academic sort of knowing. This was a real felt sense, and Mila felt like she was connecting to something that feels real and true inside herself. Finally she was able to put into words some things about her family and herself that she’d always known, but never thought (psychoanalyst Christopher Bollas calls this ‘the Unthought Known’).

Thinking about her Dad as having a feather-like quality helped Mila understand a little bit more about why she was always anxious about him; and also helped her connect with some anger too at what felt like his lack of protective strength around her.

Over the coming months, Mila found that understanding and connecting to her mixed feelings about her Dad seemed to be helping the two of them forge a stronger, calmer relationship together, even though she chose not to tell him what she had learned.

Similarly, the image of the seal, and the kitten tangled in string, became useful motifs in helping Mila understand, make peace with and move on from her past.

Mila’s depression and anxiety began to transform, through being understood and felt in new ways in therapy. Hopefully Mila’s story has given you a bit more of an idea of why it can be so incredibly helpful and illuminating to use the sandtray in therapy.

Learning to Trust Yourself and Deepen Your Intuition

Getting in touch with your own deep, felt inner knowing through sandtray work in therapy can feel profoundly healing. Over time, the process may make you feel more trusting of what’s inside you, and therefore more resilient in daily life. 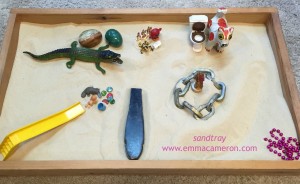 Many therapists use the sandtray, particularly Integrative Arts Psychotherapists and Art Therapists. Some Gestalt therapists also use sandtray, and sandtray is also much used in play therapy with children.

There is also a related, specialist form of therapy, for children or adults, called ‘Jungian Sandplay’.

If you’re looking for private sandtray therapy for adults in north Essex, email me at espcameron[at]protonmail.com and we can arrange a free 15-minute consultation to see whether we might be suitable to work together.

Have You Ever Used a Sandtray?

What are your thoughts about using a sandtray? I’d love to read your comments below!

*Mila is fictional, not an actual client